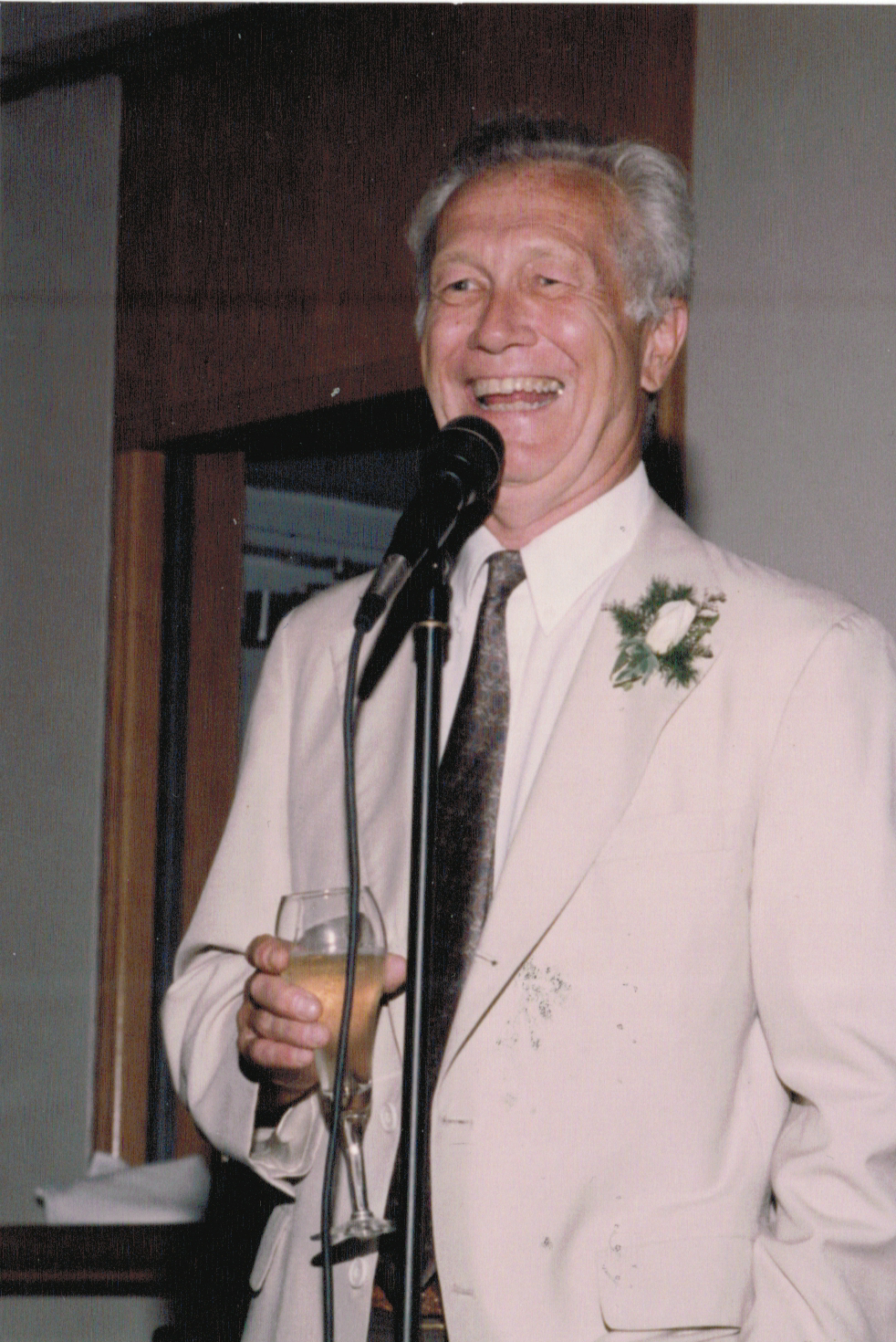 Bruce Finnie began his life in Memphis, and though he left just after his first decade, it was a place that left its stamp on him, expressed through his lifelong love of jazz and southern barbeque, and rich, vivid memories of fishing with his father on the wild Mississippi River delta between Tennessee and Arkansas.  His life there, poised to join his father in a roofing business (with “& son” already painted on the door) was disrupted suddenly and irrevocably by his father’s untimely death when Bruce was only 11. He was uprooted from the hot Memphis streets of his youth and taken to live with his grandparents in Cleveland. He would say of what followed that he had to “invent everything” about life from that point on, himself.

His life pivoted yet again when, through his exemplary service as a paperboy for the Cleveland Plain Dealer, he was awarded a scholarship to Phillips Academy Andover in faraway Massachusetts. His mother refused the offer at first, but the donors persisted, and Bruce went off to join another world, a seminal, beloved place that would, as he said, become his family. At Andover, Bruce was exposed to teachers and fellow students that opened up a completely different path for his life, a path that took him to a full scholarship to Harvard and a life in higher education, including, for more than 30 years, at Princeton University.

Bruce wore his credentials lightly. He declined to be referred to as “Dr. Finnie,” though his work at Harvard in Sociology included a sports fan study, and developing some of the first use of computers in sociological research, analyzing data from the now-famous Harvard health study. He and his best friend Harry Scarr became sought-after experts, and it was this expertise that drew him to Princeton. Recruited to be the Registrar, he asked, “what’s a registrar?” But he leaped in, and did not look back, automating registration, class scheduling, and grades at Princeton for the first time. This was the first of several roles at Princeton where he championed “zero errors” – but always put people first. He was a beloved manager and a relied-upon leader, tapped for a series of roles bringing computation to university processes. He became an iconic figure on the campus, walking with his beloved Beagle, “Took,” sending zingers on the squash courts at Dillon gym and on the softball field, and teaching as a “preceptor” in sports sociology, dubbed “Coach” by his appreciative students. He was an utterly devoted fan of Princeton basketball and football, and for decades held season tickets, rarely missing a game; he was also a die-hard fan of the Boston Celtics and the Cleveland Browns, supporting these teams in victory and defeat in a way that fully manifested the original word “fanatic.”

Perhaps because his own experience taught him that life can change on a dime, he created a life for his family that was grounded, stable, and balanced – a rock-solid foundation from which all could grow and thrive.  He married his seventh grade sweetheart, Virginia “Ginnie” Boylan (who survives him) in 1954, and together, through their enduring bond, they raised three children and generously supported their partners, Matthew Finnie and his wife Carol Guttman Finnie, Ellen Finnie and her partner Jaime Basswerner, and Janet Finnie and her husband Rob Whiteside. He was cherished and loved beyond measure as a husband, father, and grandfather, to Daniel and Hannah Finnie, to Nat Duranceau, and to Phoebe and Ellen Whiteside. He was a north star, a bright beacon for them all –  a man of unshakeable principle, markedly frugal for himself but generous with others, a colorful character who was never hesitant to share his views, but whose clear values – and openness to all people – created an indelible impression and were a guiding light and inspiration to his family and for all those whose lives he touched. A man who had to be his own guide from a very young age, he was sought out for advice, though he was very clear that “I don’t give advice, I help people find out what they already know.”

Bruce never wavered in his understated but steadfast commitments: to family, to hard and “honest” work, to the institutions that shaped him, but also to the simple pleasures: his beloved sports, travel with Ginnie and special friends, birdwatching and berrypicking in the yard with his beloved grandchildren, a cigar, and time at the fireplace with the newspaper and crossword puzzle. Centered, balanced, clear, hard-working, unflappable – Bruce lived what he believed, without apology or uncertainty.  His was a life fully and well lived, on his own terms, but always, always, with others in mind.

Those who wish to honor his life and legacy may want to consider a donation to Phillips Academy Andover’s Financial Aid Scholarships (andover.edu/givenow) to which Bruce was a faithful supporter for over 20 years.

John VanRennselaer Rawson Jr., 87, of Skillman passed away peacefully at home surrounded by his family on Monday, April 18, 2022. Fondly known as Skip, he was born in Plainfield, NJ, to parents John V. and Anna Mabel (Snoden) Rawson.

Over the course of his career, Skip had many varied interests. Formerly chairman of the Loan Committee of Montgomery National Bank, he then founded Rawson Food Services, a Wendy’s franchise company. A lover of airplanes, motorcycles, boats, and cars, Skip embraced life with great enthusiasm. A retired Major in the United States Air Force, Skip continued to be active in the aviation community, including flying in the Tora! Tora! Tora! airshow group. He was also involved in the Delaware Valley Wing of the Commemorative Air Force.

Skip’s adventures also led him to the Thousand Islands where he restored Calumet Island and made it a family retreat. He adored being surrounded by his children, grandchildren, and friends. He had boundless energy, extreme loyalty, and was truly one of a kind.

He was predeceased by his parents and his brother, Richard.

He is survived by his loving wife Dr. Joyce H. Glazer as well as his children, Lisa and Steven Garb, Laura and Paul Butrico, John and Gail Rawson, Melony and Steve Baclini, and Hannah and Billy Theodat. He will be greatly missed by his grandchildren, Aimee, Dan, Tim, Anna, Erin, Holly, Jillian, John, Miles, and Logan. Skip is also survived by his sister, Carole Pratcher and brother, John Corey Rawson.

There will be a private family burial at the Blawenburg Reformed Cemetery, 1006 Route 601 Skillman, NJ 08558. In lieu of flowers, contributions can be made to the Commemorative Air Force (delawarevalleywing-caf.org), the Antique Boat Museum in Clayton, NY (abm.org), and/or a charity of your choice.

Arrangements are under the direction of Mather-Hodge Funeral Home.

*All visitors to IAS must attest they are vaccinated and boosted.

December 7, 2022
BROWSE PAST ISSUES
FOR STORIES THAT APPEARED ON OUR WEBSITE PRIOR TO DECEMBER 14, 2011, VISIT: http://www.towntopics.com/backiss.html

Best of House and Home

A STORE BY PRINCETON MAGAZINE

Congratulations Alex and Kaley! It’s been a wh

For a little less holiday stress, let the @princet

Beautiful hair color is a guarantee at @salonpurep

It’s the week of Thanksgiving and you know what

The Holiday 2022 issue of Princeton Magazine is a

Feeding a big group this Thanksgiving? Get yoursel

Meet Giovanni, the event manager and all around gr

The Winter 2022 issue of Princeton Magazine will a

The French onion soup at @tommystaverntap next to

Have you reserved your turkey yet? Get the best fr

Voters went to the polls in Princeton yesterday, N

@easelnj has some great adoptable pets that are lo

PRINCETON FALL FEST is set to take over the courty

Right Choice Recovery is officially OPEN and will

Do you love to read as much as we do? The current

A well-designed life is a well-lived life. View th